Sometimes, when we are traveling, we can’t feel that close connection with local people or be a part of their daily life. But if you will ever have possibility, try to visit any local show (I’m not talking about those which is organized for tourists but those – which knows only local people :)) – do it!

If I have chance, I always try to attend local events, especially in Yogyakarta, where I live. I have been in many Indonesian concerts, exhibitions, events, festivals and other celebrations which were organized by local people or participants were only Indonesians. So I have a small “image” about Indonesian events. 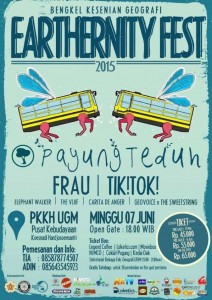 This time I want to share the discoveries of Indonesian concert, which I see really different from European ones. Even if past some time after visiting one of Indonesian concert in Yogyakarta – “Earthernity fest” (annual concert dedicated to celebrate earth day), the impression still lives in my mind. Probably this concert can be that one, which had all Indonesian events “attributes” :D.

Why this Indonesian concert was so special that I decided to go there?

First of all, I came here just because of Indonesian band “Payung Teduh”, I felt in love with their music already before coming to Indonesia :). Second, because of singer “frau”. Both of these artists in one place? I just needed to go! And for a big surprise – I discovered here new Indonesian group – TIK! TOK!.

So what you can expect from Indonesian concert? 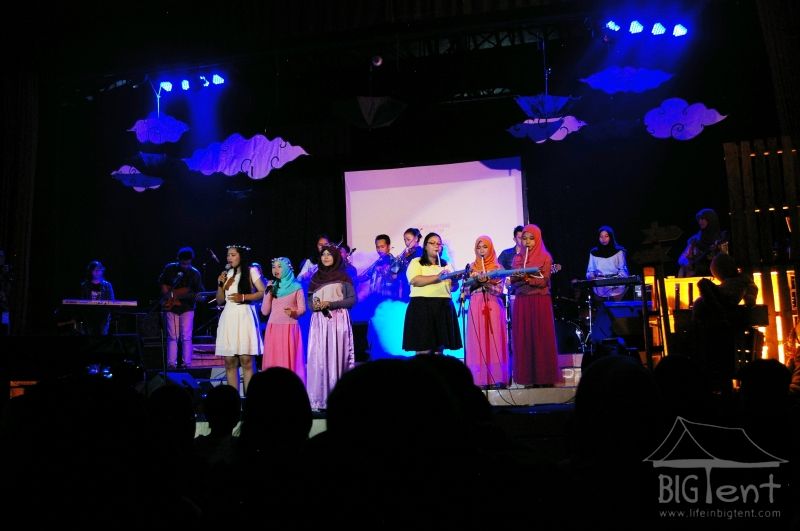 It will be late

and you can’t take inside your food or drinks (the security will take it from you) – but where it’s not happen? So this not counted like “unique” :D.

Sitting on the floor

Indonesians have sitting on the floor culture (when they are visiting people, eating, doing other things). So nothing surprising, just come to the concert and sit on the floor. People takes off their shoes, like at home :). For me – it’s not usual. If there are no chairs – you stand, in open area or very cozy place where is not enough seats – yeah you sit on the ground, but it’s not must. In this case, to sit 5 hours on the floor – some of the lower body parts really hurts :D. Nobody warn me that I need to take sitting pillow to the concert :D.

Long talks of “masters of the ceremony” (MC)

Almost none of the event (concert as well) won’t be real without MC’s. 1 – 3 people who tries to interact audience before the concert, during it. The funniest thing that MC’s speaking sometimes longer than performers stays on the stage (for example the band plays 10 min. – MC’s talks 20 min.):). Usually they just make some jokes (sometimes not funny at all), interactions with the prizes and a lot of self talks with the partner on the stage. Some of the event hires better MC’s, others takes amateurs. Because of MC’s interruption, this concert lasted 5 hours :D. How to be patient and wait for the last band the most important performer ?:)

Audience singing louder than the band on the stage

If Indonesians really like some songs, they will scream (imitating the singing) louder than the band on the stage. Even when you will ask them a bit make lower voice, because of their scream not possible to hear real singers – they won’t stop. In such way they express themselves.

You can imagine how hard for teenagers and not marriage couples in the Muslim country to express their relationship? :). If they have a chance to be a little bit in private with the partner, they will try to go where is dark and a lot of people, because no one will be in attention of them. In this concert was the same – darkest corners was busy with couples: holding hands, touching shoulders. More braver was sitting in the crowed and hugging each other from the back.

Most local people habit – eat instant noodles everywhere, even in the concert. Sellers even have more instant noodles types than other snacks. First I didn’t understood from where the smell of noodles is coming, just turn around and saw one guy eating them, then another girt in front, other guy in left. It’s looked that nothing can satisfy Indonesians stomach like “sambal” and instant noodles. Noodles “must” to be in every event.

About all unsuccessful things during the concert I won’t write. Organizers, guests and bands probably already saw it. I hope for the next year concert, organizers will fix it or at least won’t do the same mistakes.

Some moments from Indonesian concert:

In a hurry after long concert

Have you been in any local performance during your trips? What was the most impressive thing or differences from what you used to?

7 thoughts on “What to expect from Indonesian concert?”

What's in your mind? :) Cancel reply